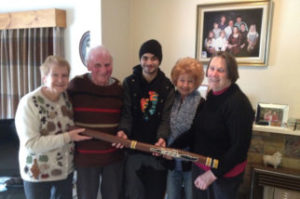 Support for the work of Jesuit Social Services comes in all shapes and sizes.

A didgeridoo, made in Darwin 20 years ago, was recently donated to Artful Dodgers Studio participant and young indigenous performer Brent Watkins.

The musical gift came from members of the Living Faith Church in Greensborough, who were “captivated and very moved” by Brent’s performance at a concert organised by the church.

“We wanted to have a concert at our church that acknowledged our support and respect for Australia’s first peoples and also to highlight our new refugees and asylum seekers,” said Church spokesman Rex Rouse.

“We contacted the Artful Dodgers Studio and asked them if they could recommend some local performers who might be interested in appearing at the event.

“Everyone here was impressed by these young and gifted performers from Jesuit Social Services, who all gave wonderful, spirited entertainment. The whole place was uplifted.”

So impressed was one member of the church, Ada Ellingham, that she contacted Brent and offered him the gift of her own didgeridoo.

“It was a great gesture from Ada and I appreciated the people at the Living Faith Church, who loved our presentation so much,” said Brent.

With support from our Artful Dodgers Studios program, Brent says he’s now “getting regular work as a storyteller, dancer, didgeridoo player and young Koori who talks about my culture to different audiences.”

Brent has performed at the ‘Dreamtime at the G’ Indigenous AFL round. He also took to the Federation Square stage after the NAIDOC March, entertaining a throng of marchers.

Brent’s 2016 highlight was appearing at Jesuit Social Services’ annual fundraising dinner, where he delivered a Welcome to Country and didgeridoo performance.

One fan at this event was Deputy Opposition Leader Tanya Plibersek, who made a point of approaching Brent after his spot to congratulate him.

“To tell you the truth, I had no idea who she was,” laughed Brent.

“I loved that night as people really listened to what I had to say. They showed me great respect. I was also commissioned by someone at the event to do an artwork, so that was also just great.”