The Catholic Alliance for People Seeking Asylum (CAPSA) continues to advocate for policy changes to better uphold the dignity and rights of each person seeking asylum by building on the groundswell of support from Australian Catholics; linking people together, and creating a collective Catholic voice for change. 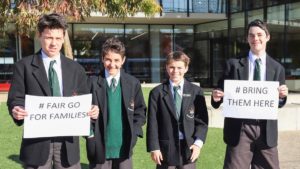 In late August, CAPSA held the 2018 National Week of Prayer and Action with 40 Catholic organisations, schools and parishes registering their involvement nationally. Actions included forums, circles of silence, prayers and contact with key members of parliament regarding the situation of people seeking asylum both on and off shore.

We can sometimes feel powerless in the face of the harsh treatment of people seeking asylum, however such community involvement is a wonderful way to engage with the issue and show your support.

Recently, CAPSA has been supporting a number of broader sector initiatives including the #KidsOffNauru and #RoofOverMyHead campaigns. CAPSA has also been active around the Status Resolution Support Service eligibility reassessment by the Department of Home Affairs which has left 800 people without an income and stifled their access to torture and trauma counselling and case management – this is an ongoing issue.

CAPSA convened a meeting between Catholic agencies to discuss service and advocacy gaps for people in this situation in Victoria and to consider ways of supporting those affected by the reassessment.