Programs like Support After Suicide, which work with people bereaved by the loss of a loved one, also work to reduce the risk of further suicide. With suicide numbers on the rise, it is important programs like this receive adequate funding, writes Jesuit Social Services’ Policy and Advocacy volunteer TONY SANTOSPIRITO.

Many Australians have been touched directly or indirectly by suicide, and sadly, according to the most recent data from the Australian Bureau of Statistics, it is on the rise. 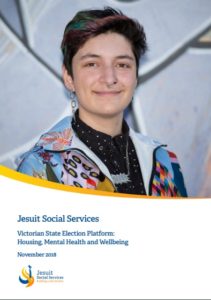 Deaths from intentional self-harm occur among males at a rate more than three times greater than that for females.  Rates for young people, Aboriginal and Torres Strait Islanders and people in regional areas are all higher than the average.  A recent news report suggests there is a crisis in emergency care for people showing suicidal ideation.

While the Federal Government has recognised the need to develop a plan to prevent suicide by formulating its National Suicide Prevention Strategy there is value in reminding ourselves that, for every suicide, there are many more people – family, friends, carers, colleagues and communities – who are deeply affected by it.

Those bereaved by suicide of a loved one can experience a range of emotions which may seem overpowering. They, too, may become vulnerable to suicidal ideation.

A participant of Jesuit Social Services’ Support After Suicide program, Angie, explains what she went through after the suicide of her partner:

Mark had to go to hospital because he suffered from severe depression and when I came home from work the day after he came home, I found him dead by suicide. And I tore into a thousand tiny shreds and my world shifted forever… I wasn’t prepared for the guilt, the anger, the fear… I didn’t realise I’d have anger so intense I’d end up raging around the house beating up my furniture… I didn’t realise I’d have to go through all this guilt where I’d endlessly go over things I’d said and didn’t say, did and didn’t do, should have done and shouldn’t have done I didn’t know about the fear and panic attacks so bad I’d get lost in the supermarket or in the park near home where I tried to walk each day just to keep myself healthy.

I didn’t realise I’d lose so much weight my own health was threatened because I simply couldn’t eat… I wasn’t prepared when six months after Mark’s death I fought my own battle with the suicide demons…  I needed help and I grabbed it wherever I could find it…It wasn’t easy to ask for help but I was in crisis and I knew I needed support from others.

In 2017-18, Support After Suicide assisted 964 children, young people and adults bereaved by suicide. The program provides counselling, support groups and online resources. It delivers training to health, welfare and education professionals and also operates in the regional areas of the Macedon Ranges and Geelong.

However, Support After Suicide is significantly underfunded, and there is a lack of certainty regarding ongoing funding, putting Victorians at risk of missing out on timely service.

The Victorian Premier has promised to hold a royal commission into mental health if Labor is re-elected and implement all of the commission’s recommendations, admitting that the present system simply can’t cope and will continue to contribute to tragedy unless reformed.

Jesuit Social Services urges all parties to give this promise bipartisan support.